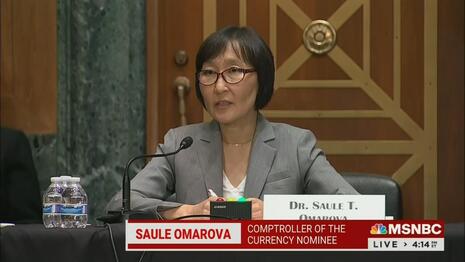 MSNBC host Nicolle Wallace on Thursday was positively shocked, suggesting Senator John Kennedy of Louisiana is either “racist” or “stupid” for labeling Joe Biden’s nominee extreme. During Senate hearings for Saule Omarova, the Comptroller of the Currency nominee, Kennedy jokingly stated he didn’t know whether to call Omarova “professor or comrade.”

Wallace raged, “This is a disgrace not just to the country, not just to the United States senate, it is a disgrace to the party of Ronald Reagan…. What do you do with a party that is at best stupid, at worst, flagrantly racist?” Considering she left the GOP and became a Democrat, the MSNBC host sure cares a lot about the honor of Reagan and the Republican Party.

Here’s some things not mentioned by Wallace in the segment about the Russian-born Omarova:

1. Back in February, she gave a speech at a “social wealth seminar” and stated that her goal was to bankrupt certain industries: “What I'm thinking about primarily is primarily the coal industry and the oil and gas industry. A lot of the smaller players in that industry are going to probably go bankrupt in short order. At least we want them to go bankrupt if we want to tackle climate change, right?”

2. It’s not just that she was born in the old Soviet Union. She attended Moscow State University and wrote her thesis on “Karl Marx’s Economic Analysis and the Theory of Revolution in The Capital.” The only copy of the thesis was mysteriously destroyed by the University. She also received the Lenin award while in college.

3. Speaking of the murderous Soviet Union, she praised it in a tweet for not having a “gender pay gap.”

Now, given those facts, Senator Kennedy’s “comrade” joke doesn’t seem as outrageous, does it? MSNBC: The network that hates facts its hosts don’t like. (For more on Omarova, see this study I wrote for NewsBusters on Monday.)

The lies on MSNBC were sponsored by Kayak. Click on the link to let them know what you think about sponsoring MSNBC's lies.

A partial transcript is below. Click “expand” to read more.]

[Clip of Senator Kennedy telling Saule Omarova he’s not sure whether to call her professor or comrade.]

NICOLLE WALLACE: Rick, I want to choose my words carefully because I am sure Kennedy will take a victory lap on another channel tonight. This is a disgrace not just to the country, not just to the United States senate. It is a disgrace to the party of Ronald Reagan who described the United States of America as a shiny city on the hill, not because it was bright or shiny but because it was a beacon for people like this Biden nominee. What do you do with a party that is at best stupid, at worst, flagrantly racist?

RICHARD STENGEL: Well, it also just smacks of McCarthyism and the House of un-American Activities period, where people for affiliations were called out as being communist. It's just an insulting question on every level, on the political level, on the level of humanity. Of course her answer was inspiring. I mean, the whole point of our system is that people can escape from authoritarian systems. And the Republican Party has become the party that supports authoritarian government. It's really — as you say, Ronald Reagan is not just turning over in his grave. He's spinning in his grave.