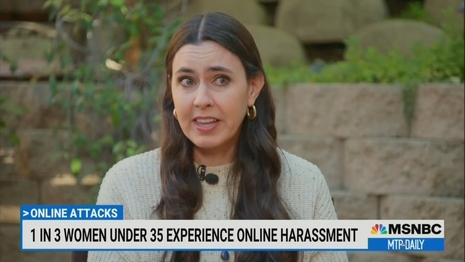 It would be funny if it wasn’t so harmful. Earlier this week, Washington Post hypocritical malefactor and tech reporter Taylor Lorenz proved herself to be a pathological liar after erroneously claiming an editor of the Drudge Report was “relentlessly” harassing her. She later deleted the tweets and bizarrely claimed the caller was lying about his identity before later insisting it was all a “joke” (you know, the thing you claim when you get caught making a fool out of yourself).

In a now-deleted tweet, Lorenz claimed “the Drudge Report editor” had been “calling and texting me relentlessly for the past couple of weeks.” She added that he got a hold of her “personal cellphone number” and “yelled at me when I asked him to leave me alone and said he would ‘blast my name all over Drudge Report until it ruins my career.’”

But as any person in the media business with their name on the company would do, Matt Drudge tried to get to the bottom of what she was claiming.

According to reporting from CNN’s Oliver Darcy in the Reliable Sources newsletter, Drudge reached out to Lorenz. Darcy reported that since it was such a “serious allegation” he “checked in with Drudge who told me that he had ‘never contacted her, nor has anyone associated with the DRUDGE REPORT.’”

Adding: “Drudge, who made clear to me he was not pleased with the allegations against his site, forwarded me an email he had sent Lorenz asking for a correction.”

And what was that correction? Well, at first she tried to suggest it was someone posing as a Drudge editor. In a screenshot of a now-deleted tweet captured by the U.K.-based Daily Mail, Lorenz wrote:

For anyone who saw my post abt this man claiming to be from Drudge calling me non stop [sic], good news: I heard from Matt Drudge & this man has zero power over Drudge! He’s claiming to be an editor all over the internet but he’s not. Sorry to disappoint everyone saying Drudge is based[.]

But according to Darcy’s reporting, Lorenz’s “initial tweets” claiming she was harassed by a Drudge Report editor were just a “joke”:

Lorenz told me that her initial tweets were a “joke” and that she found the idea someone could harm her career via the Drudge Report “hilarious.” Lorenz said she was “laughing very hard about the idea” and was simply joking about it online.

And she told Darcy she had “no drama with Drudge Report.”

Yet that too appeared to be a lie as she started lashing out at the Drudge Report. “I’m all good. It’s just hilarious because like… I didn’t know Drudge Report was even still around,” she said in one tweet that hasn’t yet been deleted. “It's fine I just got a good laugh over the idea Drudge Report would have any impact whatsoever on my career lol,” in another.

And from her publisher, the Washington Post told CNN: “Taylor was repeatedly contacted by someone who claimed to be a Drudge editor. As soon as she learned the person had no connection to the Drudge Report, she deleted the original tweet and wrote a tweet apologizing for her comment…”

So was it a “joke” or an actual occurrence? Who knows? Given who the subject is and how the Washington Post lied about doxxing Twitter user Libs of Tiktok, no one here can be trusted.

WashPost's Lorenz Attempts to 'Expose' Woman Behind Libs of TikTok

ABOUT US
Contact us: [email protected]
© 2022 - Patriots In America - All Rights Reserved.
MORE STORIES

WashPost's Lorenz Attempts to 'Expose' Woman Behind Libs of TikTok